Please check out the latest issue of the Dolores Huerta Foundation’s Weaving Movements Newsletter to learn more about the important gains and accomplishments we made this year. Big thanks to all of our esteemed volunteers and generous donors who make this work possible!

Letter from the Executive Director 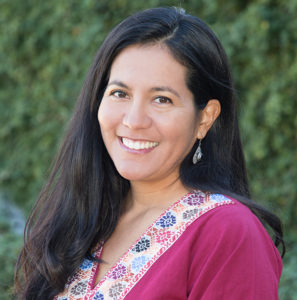 The real power lies within the communities we serve. We are inspired by their perseverance and hard work. We have been fortunate enough to provide the tools necessary to continue to build the movement. However, we need your support to sustain this growth. Beyond sharing updates and news, we hope this can be a space where we build community and cherish the advances in social and educational justice. During the past few years, we’ve been able to reach people like never before, in ways that we did not think possible. We hope to continue mobilizing folks with your collective support. Your contributions enable us to launch new strategies, establish new partnerships and service more communities in the Central and Antelope Valleys. We appreciate the confidence that our members and donors have placed in us and our work. We will strive to be better each day and look forward to partnering with you on future campaigns.

CLICK HERE TO SUPPORT THE ORGANIZING WORK AT WWW.GIVE2DHF.ORG

As a community organization, the Dolores Huerta Foundation hosted numerous door-to-door canvassing, Candidate Forums, and voter engagement outreach throughout the Central Valley, Antelope Valley & Los Angeles County to encourage voters to power to the polls. During these events, community members, youth, and Vecinos Unidos members had the opportunity to ask questions, get to know their candidates, and learn about the importance of their vote.

Some folks even joined these efforts as a “Democracy Defender” by volunteering to get the vote out to their neighbors! The fight is not over. Now the real work begins. We must mobilize our communities who represent California’s majority. We must hold the new administration and all of our elected officials accountable for our needs and demands. For just a small donation you can help the Foundation reach our goal of contacting 1,300 voters in Kern County. Your donation will go towards educational training, forums, and outreach materials needed to connect with voters.

During recent primary elections, the Dolores Huerta Foundation (DHF) hosted numerous door-to-door canvassing and other voter engagement outreach efforts throughout the Central Valley, Antelope Valley & northern Los Angeles County to encourage voters to show their power at the polls. Community members, youth, and Vecinos Unidos members had the opportunity to ask questions and learn more about the candidates at DHF hosted Candidate Forums. These “Defenders of Democracy” also volunteered to get out the vote amongst their own neighbors. In total, DHF staff, canvassers and volunteers contacted over 10,000 eligible voters, who were reminded of the importance and power of their vote. Now it is time to focus on the work of holding newly elected officials accountable.

We must mobilize these communities who represent California’s majority, to engage in legislative advocacy and action and demand that their needs are met! Your financial support helps DHF continue this outreach by providing educational training, forums, and materials needed to connect with these marginalized voters year round.

In April, 98 youth from the DHF “Liberated for Youth Empowerment” (LYFE) Program gathered virtually at local parks in Fresno, Bakersfield, and Tulare for a 2 day retreat. DHF Youth Organizers led learning sessions about critical social issues addressing the community, such as the “School-to-Prison Pipeline”, which is the systemic pushout of black & brown kids through unfair and discriminatory discipline practices . They learned how to make recommendations through their school’s Local Control & Accountability Plan (LCAP) to support efforts that prevent these types of practices from happening in their school districts.

Students participated in team-building exercises, sports, trivia games, a scavenger hunt, and created art with a social justice and political advocacy lens. Throughout each activity, youth members had the opportunity to work with each other to build their communication skills and gain trust with one another. DHF LYFE member Katherine, (she/her/hers) Age 16, said, “I was able to meet youth I haven’t seen before, it helped reunite youth who have been on zoom for so long. During the end of the retreat, we had a picnic, painted, listened to music, and other youth were playing soccer. It felt like I was at a picnic with my friends and family. ” The LYFE program aims to increase civic engagement participation among low-income, disenfranchised youth and their families to reduce racial and socio-economic disparities through evidence-based practices. These retreats give the youth an opportunity to recharge and get ready to spring into action. Currently, they are focused on LGBTQIA+ Rights and the upcoming general elections. Youth members are also excited about upcoming events. Emma (she/her/hers) Age 12 said, “I am looking forward to the Pride Prom in June!” You can support these youth experiences! A donation of $25 contributes to educational and wellness activities for a DHF LYFE member this summer.

Raúl has been a donor and supporter of the DHF for more than 10 years. His family came from Mexico to the state of Texas in 1921 where Raul was born and lived with his mother Jesusita Marrufo, his brother, and two sisters. In 1963, at the age of 12, he and his family moved to California. He left school at a young age to work and support his family. He worked as a farmworker in the fields from the age of 13 to 32. He met Dolores Huerta in 1970. He joined the Reedley Strike and later worked with Cesar Chavez to negotiate a contract. At 32, Raul was hired at a bread company where he worked until he retired at age 65.

From his time in the field, he says that he felt committed to justice, stating “I cannot abandon the cause.” Learning that Dolores founded an organization, he became a supporter. Since February 2010, Raúl has taken the time to travel to his local post office, purchase a money order and mail it to DHF every single month, without fail! Raul’s message to Dolores as she continues to work for justice is, “May God bless her and give her strength, and may her fight continue.” His wish is that the community will continue supporting the cause. The DHF is incredibly grateful for Raul’s monthly gift. He is an example that our solidarity is our strength!

Next month, Raul at 71 years old, will make his 150th monthly pilgrimage to his post office to purchase his money order and mail it to DHF. Can you please take a few minutes of your time to join Raul in becoming a monthly donor as well, by visiting Give2DHF.org?

DHF is honored to announce that Camila Chávez, Co-Founder and Executive Director, was awarded the 2022 James Irvine Foundation Leadership Award, which recognizes innovative leaders whose breakthrough solutions to critical state challenges improve lives, create opportunity, and contribute to a better California. This award is a reflection of her dedication to social justice, as well as the hard work and victories accomplished alongside the DHF Vecinos Unidos® members and volunteers.

On May Day, the DHF marched the streets of Fresno & Tulare with SEIU, the United Farm Workers, and other community organizations, to stand in solidarity with workers & immigrants around the world. Although May Day is not recognized as an official holiday in the United States, DHF will continue to honor and commemorate the efforts, struggles and victories for labor rights and living wages of blue collar workers each year.

DHF’s COVID-19 Education & Safety Team continues to inform community members and provide options for easily accessible vaccines. DHF is proud to report that, to date, we’ve co-hosted more than 100 vaccine clinics and a total of 7,744 vaccines have been administered! Together we can overcome the pandemic. We need your help to branch out to even more communities in the Central and Antelope Valleys & Northern Los Angeles County. Please consider supporting this work at Give2DHF.org.

The Dolores Huerta Foundation was honored to be part of the groundbreaking celebration for the new Kern Community College District campus in Arvin, California. In 2016, DHF and Vecinos Unidos® worked to pass Measure J, allocating $500 million for the new Arvin campus that is expected to open in 2024.

Bans Off Our Bodies

In response to the leaked draft of the Supreme Court opinion that would overturn the right to abortion established in Roe v. Wade, the Dolores Huerta Foundation, in partnership Planned Parenthood and local partners, organized the “Bans Off Our Bodies” rally held in Kern, Fresno, and Tulare County to advocate for abortion rights for all.

DHF believes in the right of all people to have bodily autonomy and decide when/if they want to have a child. 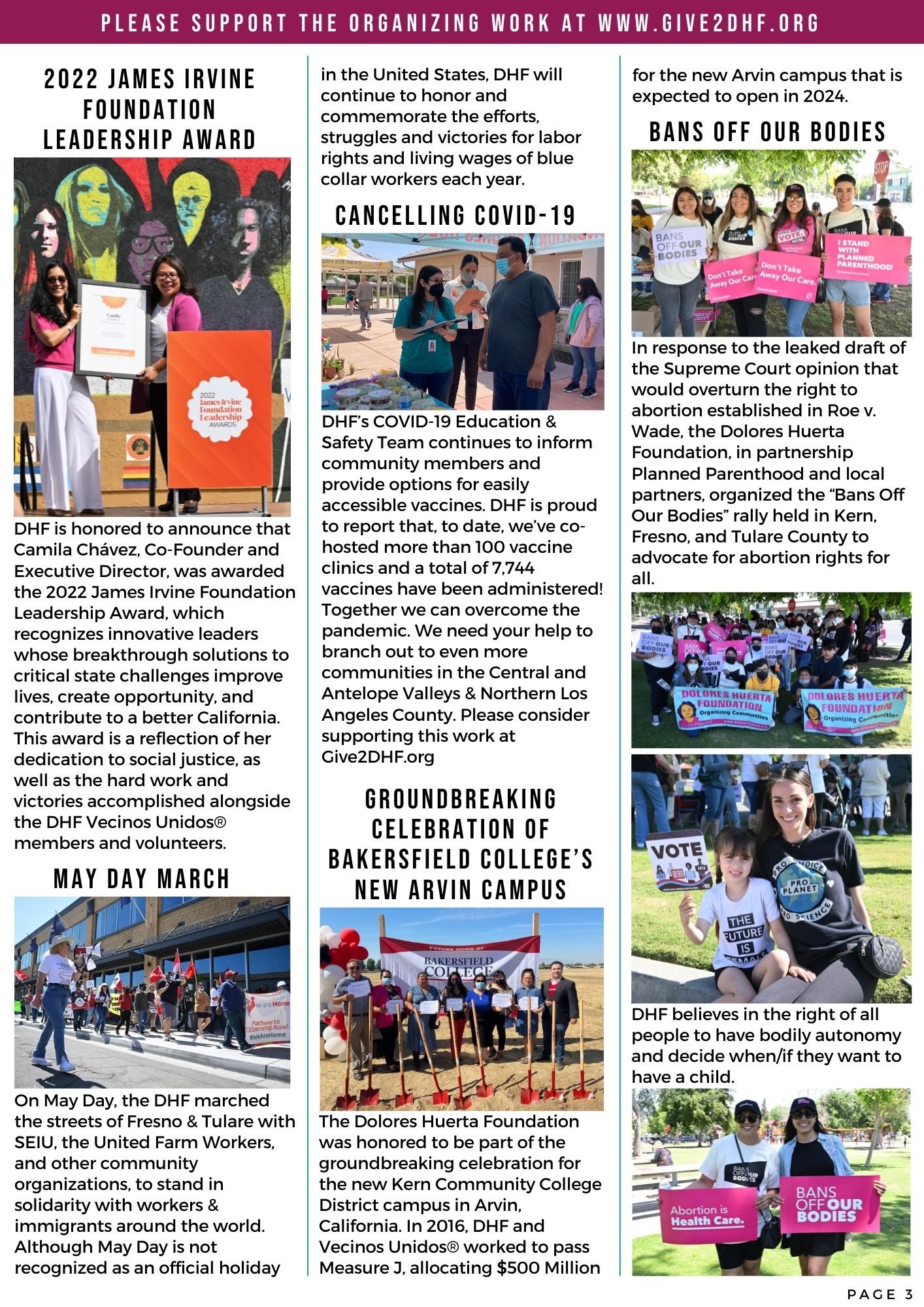