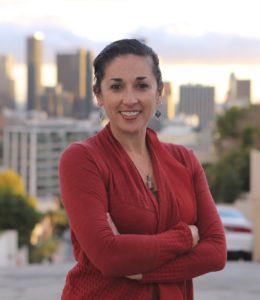 Jamila Guerrero-Cantor, EdD, NCC was raised in Los Angeles, CA where she has worked as a School Counselor for diverse Deaf students and other students in K-12, community college, and university settings. She became a young activist at Jane Fonda and Tom Hayden’s political/performing arts camp Laurel Springs in Santa Barbara, CA.

Through her high school years she learned about organizing with the Los Angeles Student Coalition – protesting apartheid on the steps of the South African Consulate in Beverly Hills. Later, her passion for music and social justice merged together to form a band, “Wozani” (a call for the people to come in Zulu), that toured throughout the U.S. She has with a B.A. in Community Studies from the University of California, Santa Cruz, where she did her fieldwork within the organizing efforts of the United Farm Workers – and then joined on as an Organizer and National Coordinator.

She is a National Certified Counselor (NCC) and graduated with a M.A. in School Counseling and Guidance from Gallaudet University in Washington, D.C. -the first and only university for the Deaf in the world. She holds a doctorate in Educational Leadership for Social Justice from California State University East Bay where she researched intersectional oppressions experienced by Latinx Deaf students who are living as undocumented in California.

She has done counseling work with Deaf youth in the coastal region of Oaxaca, Mexico enabling her to learn about the complexities of their realities as well as Mexican Sign Language. She has served on projects as a member of the California Mental Health Services Act Multi-Cultural Coalition and the National Counselors for the Deaf Association. As a Board Member for the Dolores Huerta Foundation she is committed to supporting the work of social justice – the legacy of Dolores Huerta.