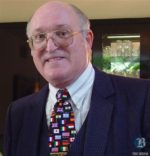 During Jack Brigham’s 2o years as a teacher in the Bakersfield City School District, he coached many outstanding Kern athletes, including Dean Jones, who became top Junior College basketball player in California during his sophomore year at Bakersfield College.

While at BC, his most unique award was being selected a member of a group of 50 who represented outstanding leaders during Bakersfield’s first 100 years. He was also awarded the Beautiful Bakersfield Individual Humanitarian Award. He was honored at the Renegades’ 100 year celebration as being one of the top influences in BC history, and in addition was presented with the George White Award and served as the Grand Marshall of both the East Bakersfield High School and Bakersfield College homecomings.

In 2000 he and his close friends, Milt Younger and Harvey Hall, founded the BC Center for Kern Political Education as a nonpartisan BC foundation.
The center hosted speakers, as well as provided annual We The People conferences for Kern youth and their coaches, annual Sacramento trips and annual youth-community leader honoree dinners.  It also funded internships for many Kern youth.

Following his retirement, he co-founded PEAK (Progressive Education and Action in Kern) with Kim Schaefer and Tom Webster.  PEAK interns continue to create a weekly flyer and Issues Quarterly Magazine. In addition Jack has been part of the Dolores Huerta Foundation Board of Directors and was honored as Chamber of Commerce Humanitarian-of-the-year.

On December 19, 2015, his former BC student and honorary family member, Abdallah Ben-Hamallah, gave a health center to the community of Malika, Senegal, that will serve approximately 100,000 people each year.  It is named Brigham and Younger Health Center in honor of Jack Brigham and his mentor of more than four decades, Milt Younger.

Jack leaves behind countless friends, admirers, colleagues and former students whom he has helped over his career. Those who knew him feel privileged and grateful to have known a man dedicated totally to the betterment of his community and human kind. His passion was fostering learning and personal growth in his students, assuming the role of father, mentor, friend, support figure for countless young people.