FOOD CHAINS will be opening exclusively in Kern County on Friday, November 21st.

A panel will follow with Camila Chavez, Executive Director of the Dolores Huerta Foundation, and other community leaders  from 8:45pm – 9:10pm. 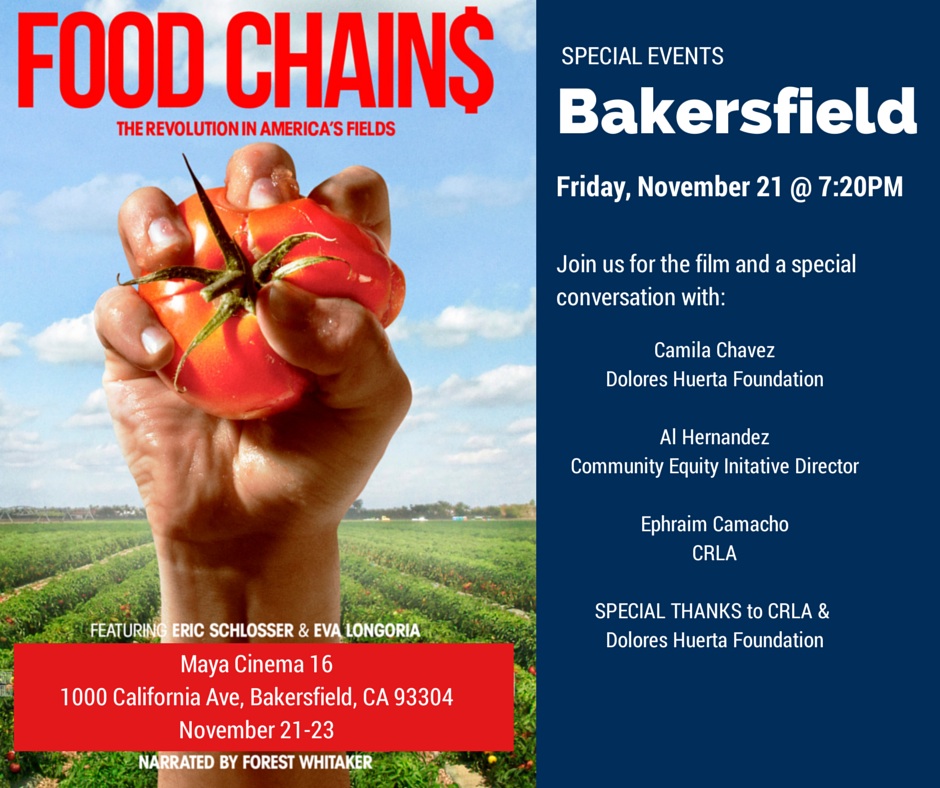 In this exposé, an intrepid group of Florida farmworkers battle to defeat the $4 trillion global supermarket industry through their ingenious Fair Food program, which partners with growers and retailers to improve working conditions for farm laborers in the United States.

There is more interest in food these days than ever, yet there is very little interest in the hands that pick it. Farmworkers, the foundation of our fresh food industry, are routinely abused and robbed of wages. In extreme cases they can be beaten, sexually harassed or even enslaved – all within the borders of the United States.

Food Chains reveals the human cost in our food supply and the complicity of large buyers of produce like fast food and supermarkets. Fast food is big, but supermarkets are bigger – earning $4 trillion globally. They have tremendous power over the agricultural system. Over the past 3 decades they have drained revenue from their supply chain leaving farmworkers in poverty and forced to work under subhuman conditions. Yet many take no responsibility for this.

The narrative of the film focuses on an intrepid and highly lauded group of tomato pickers from Southern Florida – the Coalition of Immokalee Workers or CIW – who are revolutionizing farm labor. Their story is one of hope and promise for the triumph of morality over corporate greed – to ensure a dignified life for farm workers and a more humane, transparent food chain.

Learn more about the film at www.foodchainsfilm.com