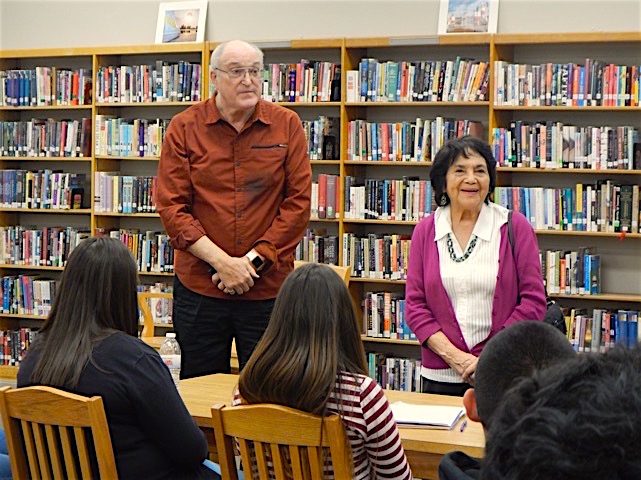 It is with heavy hearts that we share the sad news of the passing of our dear friend, and brother in the movement, Jack Brigham. He was a great humanist and a great educator. He was completely devoted to young people, especially students. He was a Dolores Huerta Foundation Board Member and extremely generous with his resources in supporting the foundation. He was a progressive leader in Kern County and a friend of labor and a proponent of workers’ rights. He was one of the earliest supporters of the United Farm Workers. As a part of the Teachers’ Union he served as President of the Central Labor Council. His life was one of giving, of himself, of his knowledge, and his resources to improve the lives of so many and make Kern County a more progressive community. He will be sorely missed and it will take many people to fill his shoes. His life serves as an inspiration to others. Our prayers are with his family and loved ones. ¡JACK BRIGHAM, PRESENTE!

John Edward (Jack) BRIGHAM has lost his battle with cancer on July 7th, 2016. He will be missed by many.

Born August 24, 1946, in East Moline, Illinois, he was the second child and only son to Edward Case Brigham and Winifred Edith McCool Brigham. At the time of his birth, his parents and older sister, Judy, lived in Palos Heights, Ill. His father, Ed, was a pilot for American Airlines. In 1949 they moved to Taft, CA, where Ed began work for Sparkle Cleaners, Winnie began teaching Kindergarten and his sister, Ann, was born. In 1957 his family moved to East Bakersfield, where Ed became manager of the new Bakersfield branch of Sparkle Cleaners, and Winnie continued teaching.

His greatest influences during his formative years were his grandfather, Dr. David John Brigham, a Presbyterian minister, his parents, Ed and Winnie, his sisters, Ann and Judy, his friends and teachers.

Jack attended Horace Mann Elementary School and Sierra Junior High, entering East Bakersfield High School as a freshman in 1959. While attending East High, he became an Eagle Scout, the student body president, and an all city basketball player. Ward Fulcher, his Humanities teacher, and Ralph Krafve, his varsity basketball coach, were his most influential EB teachers. He graduated in l964 and enrolled at UC Santa Barbara, where he received a B.A. degree in history and political science. Later he earned a Masters degree in History from Cal State Bakersfield

During his four years at UCSB he was an Alpha Delta Phi leader and participated in the intra mural programs. Following his graduation, he returned to Bakersfield and became a BCSD teacher at Lincoln Junior High, where also coached the Jr. Optimist basketball teams and became a lifetime PTA honoree.

In July, 1969, he was at Fraternal Hall when Bakersfield City Police officers assaulted the youth and chaperones at a Bakersfield Recreation Department public dance for youth. After testifying in front of the Grand Jury and in court, he dedicated his life to public education and social justice. He found the inner courage to speak truth to power with integrity.

During his 20 years as a BCSD teacher he coached many outstanding Kern athletes, including Dean Jones, who became top Junior College basketball player in California during his sophomore year at Bakersfield College.

While at BC, his most unique award was being selected a member of a group of 50 who represented outstanding leaders during Bakersfield’s first 100 years. He was also awarded the Beautiful Bakersfield Individual Humanitarian Award. He was honored at the Renegades’ 100 year celebration as being one of the top influences in BC history, and in addition was presented with the George White Award and served as the Grand Marshall of both the East Bakersfield High School and Bakersfield College homecomings.
In 2000 he asked his close friends, Milt Younger and Harvey Hall, if they would co-found the BC Center for Kern Political Education as a nonpartisan BC foundation.
The center they created hosted speakers, as well as provided annual We The People conferences for Kern youth and their coaches, annual Sacramento trips and annual youth-community leader honoree dinners. It also funded internships for many Kern youth.

Following his retirement, he co-founded PEAK (Progressive Education and Action in Kern) with Kim Schaefer and Tom Webster. PEAK interns continue to create a weekly flyer and Issues Quarterly Magazine. In addition Jack has been part of the Dolores Huerta Foundation Board of Directors and was honored as Chamber of Commerce Humanitarian-of-the-year.
On December 19, 2015, his former BC student and honorary family member, Abdallah Ben-Hamallah, gave a health center to the community of Malika, Senegal, that will serve approximately 100,000 people each year. It is named Brigham and Younger Health Center in honor of Jack Brigham and his mentor of more than four decades, Milt Younger.

Justice Thurgood Marshall’s words, “He did the best he could with what he had.” are the best words he would use to summarize his life. He was able to live his dreams because of the love, inspiration and encouragement of his friends.
In addition to those identified previously he loved his working meals with his close friends, Bob Severs, Bakersfield Sister City leader John Hefner, 2012 U.S. Presidential Medal of Freedom recipient Dolores Huerta, and Bakersfield’s “Mother Teresa” Wendy Wayne.

Jack leaves behind countless friends, admirers, colleagues and former students whom he has helped over his career. Those who knew him feel privileged and grateful to have known a man dedicated totally to the betterment of his community and human kind. His passion was fostering learning and personal growth in his students, assuming the role of father, mentor, friend, support figure for countless young people.
Jack is succeeded by family members, who include his sisters, Margaret Ann Brigham Pool (husband, Gary) of Council, Idaho, and Judith Brigham Sims-Barlow (husband, William Barlow) of La Veta, Colorado; his nieces, Gina Pool (of Springfield, Nebraska) and Amy Sims (of Denver, Colorado); nephews, Chris Pool (wife Lisa of Springfield, NE) and Jay Sims (wife Cathy of Westminster, Colorado); and grand nephew, Chevalier Case Gordon (Gina’s son of Springfield, Nebraska).

The family would like to extend a special thank you to Bakersfield Memorial Hospital and Gentiva Hospice for their attentiveness and caring staff. Jack especially enjoyed Gentiva’s Adrianna during her home visits and help.

In lieu of a service or ceremony, Jack is in hopes his friends and role models will do something special for a person, group or organization in the spirit of integrity and civic unity. A Jack Brigham Scholarship Fund is in the process of being established. Donations to this fund or to any charitable or scholarship fund of your choice would be of benefit to others and appreciated.