On Monday, April 9, 2018, the Dolores Huerta Foundation (DHF) participated in the second of five hearings the Kern High School District (KHSD) Board of Trustees is holding to create new district boundaries. Gerald Cantu, Education Policy Director and Sophia Garcia, GIS Coordinator of the Dolores Huerta Foundation presented the organization’s proposed best practices and district maps to the KHSD’s Board of Trustees. 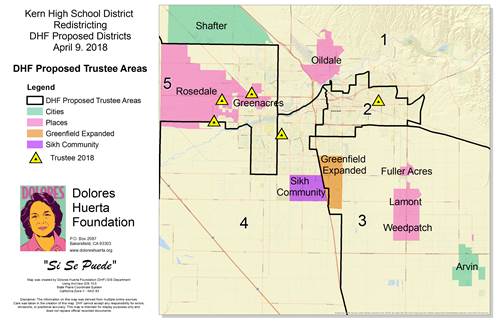 The Dolores Huerta Foundation stresses the significance of aligning the creation of new trustee boundaries with the following best practices in order of importance: equal population among districts, geographic compactness, line contiguity, preservation of local political subdivisions, the preservation of communities of interest, and the protection of incumbents. The foundation finds that current district trustee areas do not comply with California’s and the Federal Government’s Voting Rights Act, have diluted the Latino population and vote, and only have one effective Latino-majority district, District 2, even though Latinos are 52.8% of Kern County’s population.

In 2016, the population within the Kern County High School District was 635,411; therefore, each of the five districts should have a population with a small deviation from 127,082; DHF proposes a district map with a variance of 4,268, or 3.4%, while the current district map has a high variance of 39,382, or 31%, due to natural population growth. Furthermore, census designated places such as Rosedale and Oildale are divided in three and two respectively. District boundaries should not cross through municipal lines and census designated places to preserve local political subdivisions. Most importantly, the foundation firmly believes that the Latino population has been intentionally dissected into three: District 2, 3, and 5; this undercuts Latinos’ voting power as a bloc. In response, the foundation would like to see two Latino-majority districts come out of this redistricting plan. 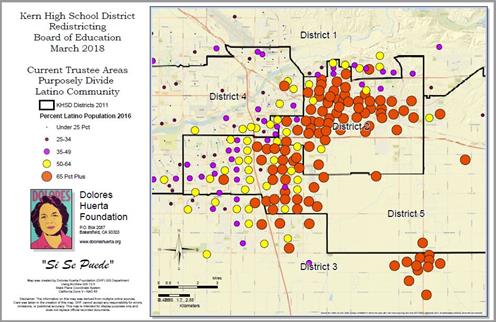 DHF would also like to note that trustees from District 1, 3, and 4 have secured seats despite living within a three-mile radius from one another, while their districts in total cover 2,500 square miles of land. In order to utilize best practices, DHF considers the location of incumbents to be important, but recognizes this principle is low priority and subordinate to the aforementioned best practices.

The Dolores Huerta Foundation is counting on the Board of Trustees to correct the current district lines to provide our communities with proper and effective representation in the leadership of the Kern High School District. For more information on the ongoing redistricting plans, please contact Gerald Cantu at gcantu@doloreshuerta.org or by telephone at (661) 322-3033 ext. 209.