DHF in Action: DHF Supports MALDEF’s Lawsuit Against Board of Supervisors for Violating Voting Rights Act, 4/22/16 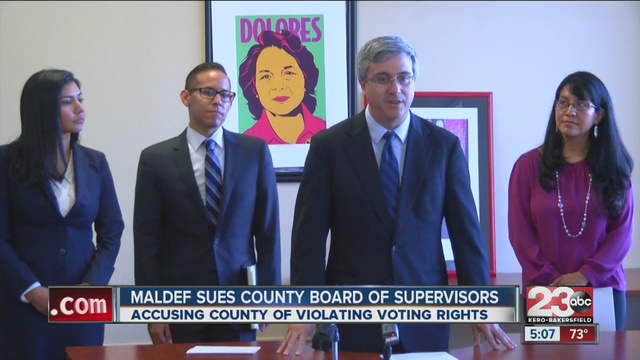 On Friday, April 22nd, 2016 MALDEF, the nation’s leading Latino legal civil rights organization, filed suit against the Kern County, California Board of Supervisors, in the U.S. District Court for the Eastern District of California, for violating Section 2 of the federal Voting Rights Act of 1965.   The suit, filed on behalf of Latino citizens of Kern County, challenges Kern County’s 2011 redistricting plan for unlawfully diluting the Latino vote and effectively preventing Latinos from meaningful participation in Board of Supervisors elections.

In 2011, the Kern County Board of Supervisors adopted a new 5-district county supervisorial plan based on the 2010 U.S. Census data. The plan contains one district – District 5 – where Latinos constitute a majority of the eligible voters. That district is currently represented by Leticia Perez, who was elected in 2012, and it is the only district that has regularly elected a Latino candidate in the last two decades. MALDEF contends that a fairly drawn plan should have included a second Latino majority district in northern Kern County. Instead, the 2011 redistricting plan divided a politically cohesive Latino community in the northern part of Kern County into two supervisorial districts, neither one of which has sufficient Latino population to enable Latino voters to elect a candidate of their choice.

“The growth of the Latino population in Kern County warrants additional representation of Latino-preferred candidates on the Board of Supervisors,” stated Thomas A. Saenz, MALDEF President and General Counsel. “The Board’s refusal to create a new Latino-majority district, even after being presented with the facts in support of one, led directly to this federal lawsuit.”

Dolores Huerta, Kern County resident and founder of the Dolores Huerta Foundation, said, “We are grateful that MALDEF is committed to represent our community to rectify a poor decision made by the Board of Supervisors five years ago.  We are confident that the Latino community in Kern County will win the representation that we deserve.”

Although Latinos comprise 34% of Kern County’s citizen voting age population, the current districting plan prevents Latino voters from attaining representation on the Board in numbers that reflect their voting strength, and the underrepresentation of Latino-preferred candidates has persisted for decades.

Joaquin Avila, co-counsel representing plaintiffs in the case, said, “The 21st Century continues to herald the growth of the Latino population within the state of California and the necessity to fully politically integrate the Latino community into the body politic. All we are seeking is an opportunity to elect candidates of our choice in a manner that is enjoyed by the white population.  Nothing more.”

Matthew Barragan, MALDEF Staff Attorney, said, “The fracturing of the Latino community in northern Kern County is precisely the kind of racial gerrymandering that the Voting Rights Act was intended to cure, and that the U.S. Supreme Court has repeatedly condemned as illegal discriminatory vote dilution.”

MALDEF and the Plaintiffs in the case seek an order requiring the County to redraw its supervisorial plan to reflect the growth of the County’s Latino population in a manner that provides all voters with an equal opportunity to elect candidates of choice.

The right to vote is fundamental to democracy in the U.S. and must be protected for all citizens, regardless of race. MALDEF supports equal representation for all communities across the country.