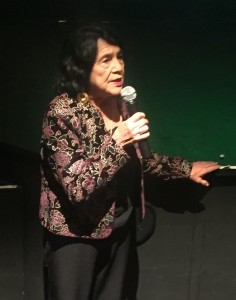 “This School-to-Prison Pipeline has got to stop! When kids are removed from schools, they can’t do their school work. They fall behind and end up dropping out. Many of these young people end up incarcerated. We have to help these kids by making sure they stay in school.” – Dolores Huerta

To read the full story click on this link EDUCATION

Manuela Ortega, is a Spanish-speaking, immigrant. She has been a member of the Lamont Vecinos Unidos group since its start in 2004. She has three children in the Lamont School District. She has served on school committees advising the Lamont School Board on English Learners. Through training and advocacy, she knows her rights. She is not afraid to address the board of Trustees, and has done so on many occasions, regarding the needs of English language learners in the Lamont School District. Her youngest son, Baltazar Ortega, began having difficulties in school. He was lacking motivation and manifesting behavioral issues. As an informed and empowered parent, with the skills and confidence necessary to navigate the educational system, she made sure her son received speech classes and glasses. His self-esteem and grades improved. Through grassroots organizing, proactive leadership, continual engagement, and sense of responsibility is cultivated and strengthened. 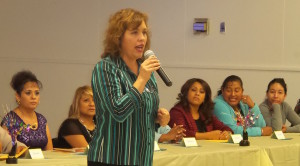 The DHF Vecinos Unidos celebrated after graduating from a Compreshensive Parent Training Program. Instructor Martha Elias provided families with the valuable tools needed to navigate the educational system and advocate for the best possible educational experience for their children. They learned Strategies for Authentic Parent Engagement, Understanding and Getting Involved in the Local Control Accountability Plan (LCAP) and more.

In October the Walking and Biking Safety Committee held their first ever Cumbia Bike Ride a well-attended event that encouraged the community to have fun with movement and music, and helped raise awareness about bicycle infrastructure needs in Arvin. 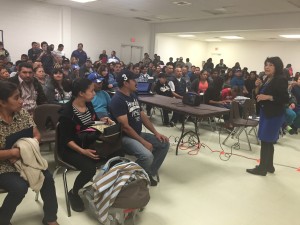 In May, under the direction of Jess Contreras, Civic Engagement Coordinator, the DHF collaborated with local legal agencies and community organizations to host an Immigration Forum. Attendees were provided with information and free legal consultations regarding AB 60 Driver’s Licenses, Deferred Action for Childhood Arrivals (DACA), Deferred Action for Parents of Americans (DAPA), and the U Visa for Victims of Crimes. Over 100 people attended. 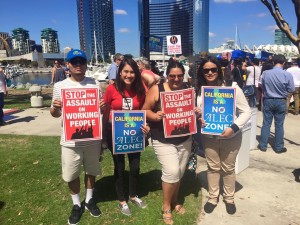 To read the full story click on this link CIVIC ENGAGEMENT 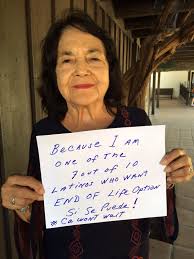 “I came to Sacramento to urge members of the Assembly to support SB 128, the End of Life Option Act. This bill will affirm a fundamental right for terminally ill and mentally competent patients to choose how their final days are lived. This is a basic civil rights issue offering a compassionate and dignified end-of-life choice that should be left between a patient and doctor.” – Dolores Huerta

To read the full story click on this link LEGISLATION

DHF in Action: Mass Protest in San Diego to tell ALEC: NOT HERE, NOT EVER!

Dolores and the staff of the DHF gathered in San Diego on Wednesday, July 22nd, joining workers, community groups, faith leaders and progressives in a mass protest to tell ALEC: NOT HERE, NOT EVER!

The goal of ALEC’s annual conference is to put corporate special interests and right-wing legislators together to plot how to further undermine workers’ rights, environmental protections and basic fairness. Corporate lobbyists and multi-millionaires have a chance to wine and dine these politicians, promise them fat contributions and a taste of the good life in exchange for supporting bills that keep paychecks low, corporate welfare high and restrict the rights of their political enemies.

ALEC is the most powerful, well-funded corporate special interest front group in America. The mission of American Legislative Exchange Council (ALEC) is simple: shower the 1% with special privileges and advantages at the expense of everyone else. ALEC’s agenda is an affront to progress. It’s an affront to basic rights. It’s an affront to democracy.

They came to San Diego because they want to establish a foothold right here in California. It’s time we stand together to tell ALEC “HELL NO!” 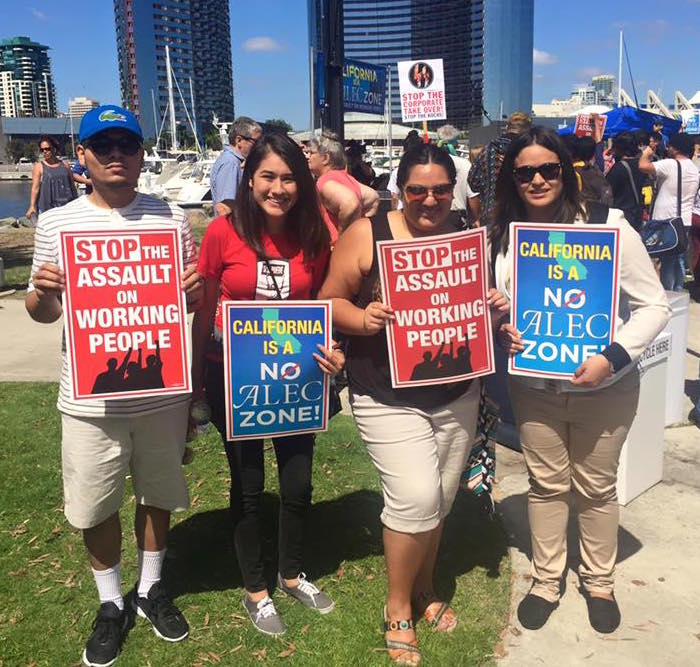 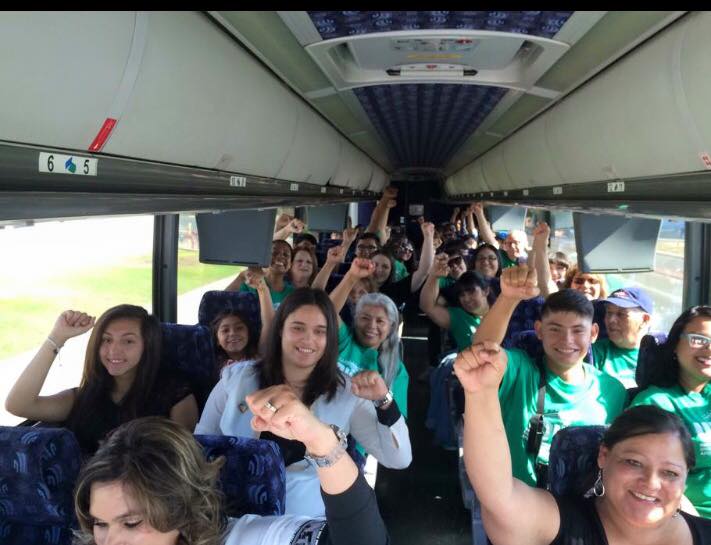 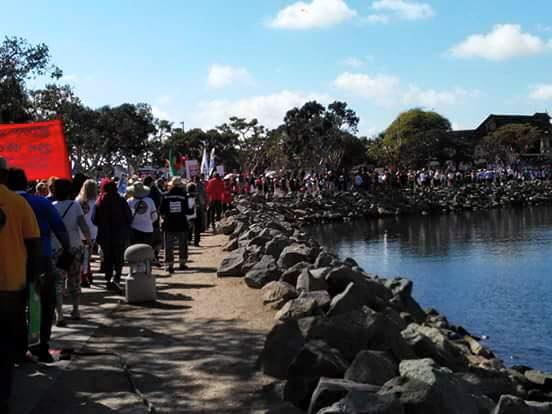 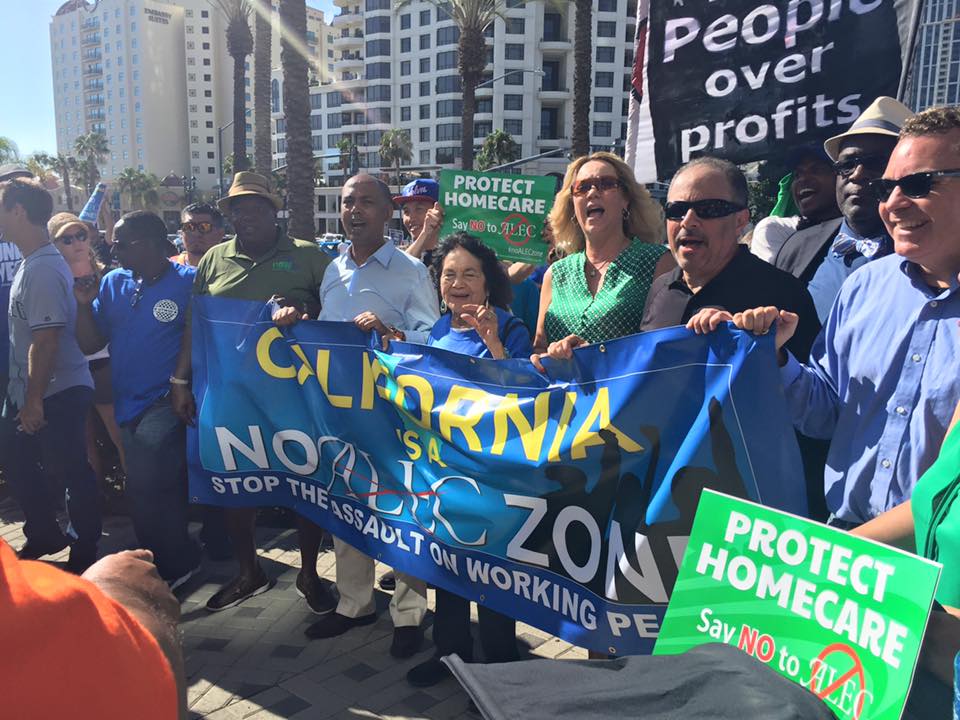 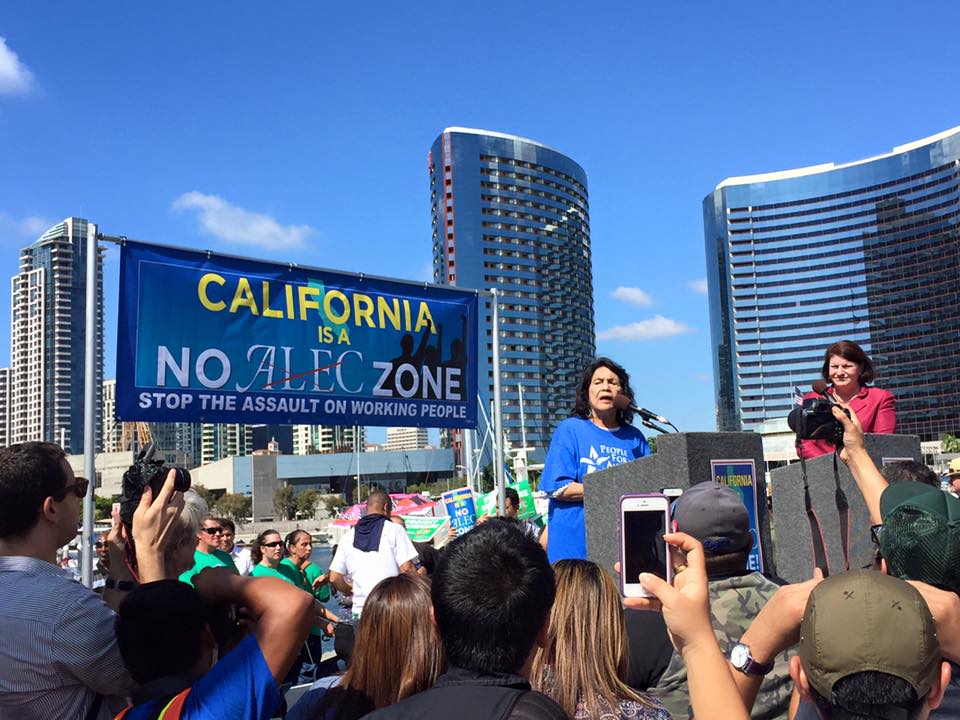 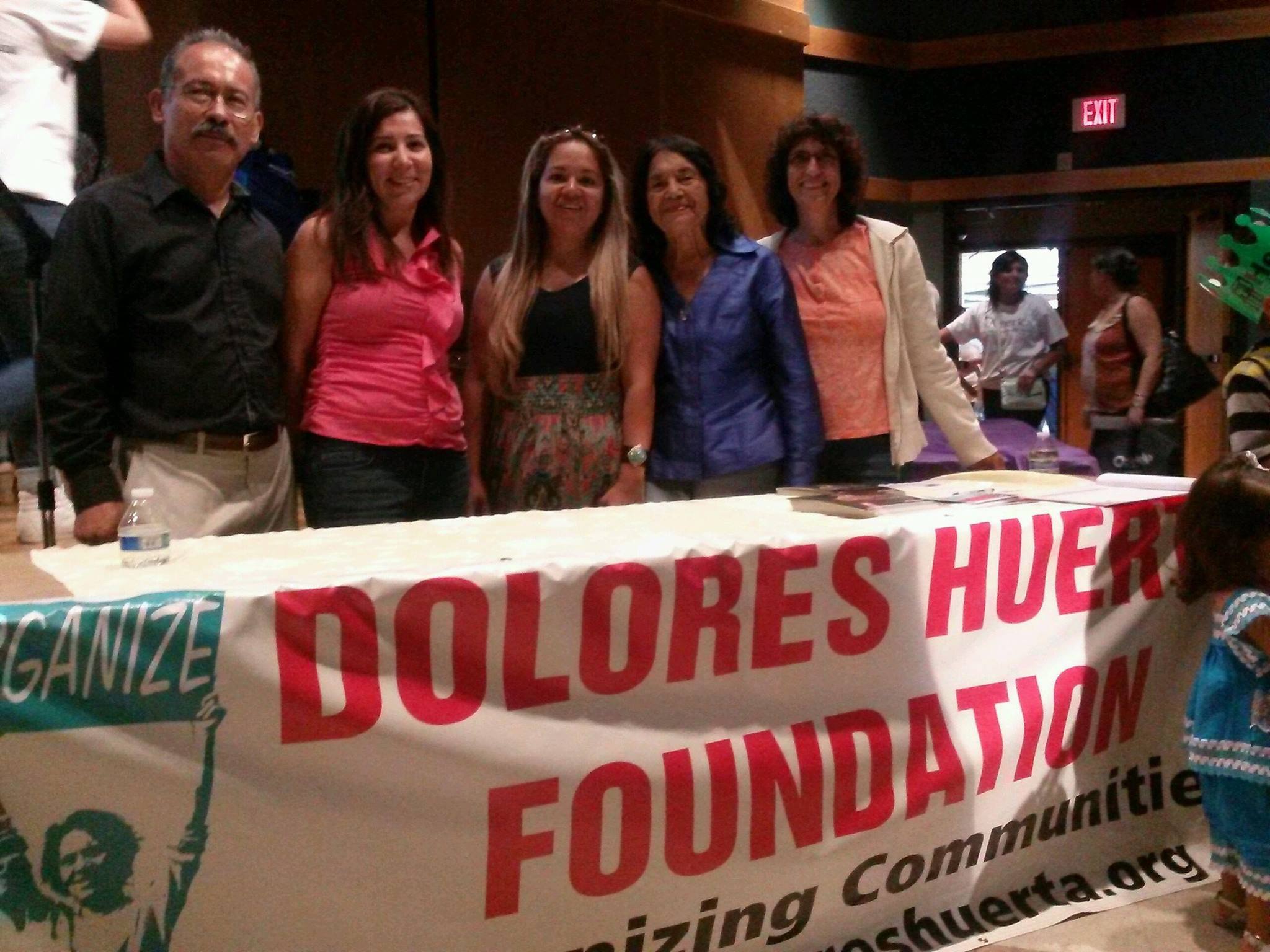 On Saturday, June 27th, 2015 President, Dolores Huerta, addressed a well attended and highly informative community forum on immigration with the theme “KEEPING FAMILIES TOGETHER WITH     DACA & DAPA.” She encouraged the crowd to be aware of political campaigns claiming to support the people’s interests, while pushing a voting agenda that goes against their own interests. “Don’t be blind voters. Become educated voters!” She shed light on the Koch Brothers’ funded *LIBRE Initiative a deceptive campaign targeting Latino voters.

Community leaders and local experts addressed many other important issues of interest to the immigrant community, including recent executive actions by President Obama on immigration. Community members benefited from free consultations with immigration attorneys. Attendees were warned of immigration fraud and given tips on how to avoid being scammed by unscrupulous lawyers and notaries. Participants also received information on naturalization and the process for becoming a U.S. citizen. 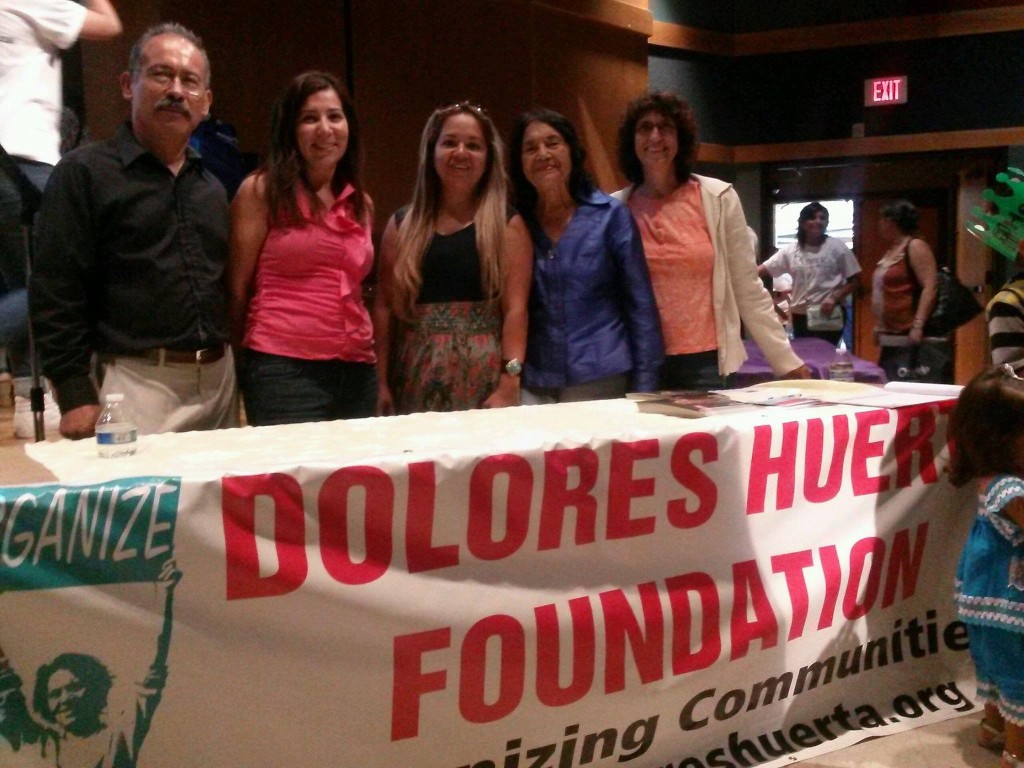 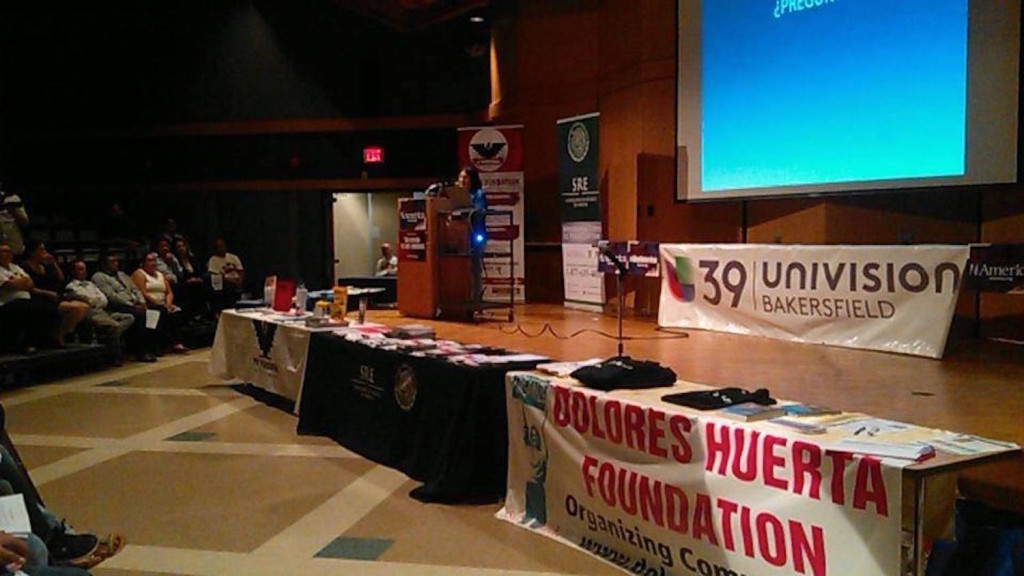 by Juanita Chavez | May 8, 2015 | Dolores Huerta Foundation In Action 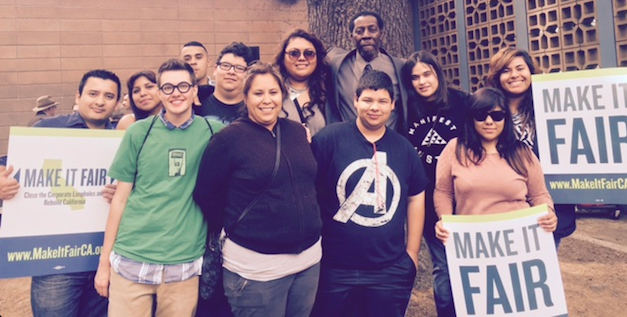 DHF Staff and Volunteers joined more than 200 people who stood up to Make It Fair at the kickoff of the campaign on Thursday morning. Leaders from the small business, education and faith communities stood together on stage and made the case for fairness. The fight begins!

Civic Engagement Coordinator, Jess Contreras, said, “The time is now to make it fair. We’ve made the corporations rich. It’s time for them to give back and invest in our communities.”

The event marked the historic launch of Make It Fair California – a diverse coalition of advocates dedicated to closing CA’s commercial property tax loopholes — by assessing commercial and industrial property at fair market value — so California can continue to invest in strengthening schools & important local priorities.

Do you think our community needs better schools, safer parks, cleaner streets and more opportunities for everyone to get ahead? So do we. That’s why we’re standing up to big corporations and telling them it’s time they pay their fair share. Stand with us. Take the pledge to Make It Fair.

DHF in Action: Drawing a Line in the Sand for Authentic Parent Engagement Thurs. 5/7

by Juanita Chavez | May 7, 2015 | Dolores Huerta Foundation In Action 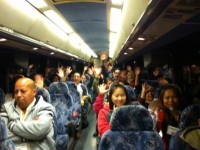 On May 7, parents will be “drawing a line in the sand” and asking the California State Board of Education to hold all schools accountable for authentic parent engagement practices. In partnership with organizations across the state, Families In Schools will be coordinating a bus trip of more than 50 parents/caregivers who will be traveling to Sacramento to testify at the State Board meeting. The parents/caregivers have a simple message: parents want to have a role and a voice in their children’s education.

National leaders in this field of research, such as Anne Henderson, Karen Mapp, Joyce Epstein, and many more, have clearly demonstrated that when schools engage parents, student achievement increases and school culture improves. Parent engagement practices can no longer be seen as merely “check-the-box” requirements to receive state or federal funding. Conducting a community forum here or there or adding a space for public comment at a board meeting have proven to be insufficient strategies for truly partnering with families. Authentic parent engagement is much more than that – it is about creating a welcoming and supportive culture at the schools and instilling the values in school staff so that all parents/caregivers are welcomed and respected as equal partners and decision-makers.

Parent engagement practices across the state continue to be highly uneven, uncoordinated and misaligned from student achievement goals. Sadly, the most basic indicators of authentic parent engagement are missing in many school communities. This is particularly true in immigrant, low-income communities and communities of color where barriers such as language, lack of work flexibility, financial limitations, and limited knowledge of school systems are often seen by schools as excuses to blame parents/caregivers rather than reasons to adapt or enhance policies and practices.

Authentic parent engagement cannot be optional nor can it be left to be defined by rotating superintendents or principals. California must be BOLD and listen to the voices of parents/caregivers; and “draw a line in the sand” by establishing clear expectations on how every school should partner and engage parents/caregivers, especially those families of the students targeted by LCFF.

The DHF was proud to partner in a successful Community Town Hall hosted by Kern County Supervisor, Leticia Perez, on the evening of February 5, 2015.

The line to register for the event spilled out the door of the David Head Center in Lamont. Every seat in the hall was filled. Elected officials, representatives from various organizations, and community leaders, including Dolores Huerta, shared crucial information with nearly 200 residents from the towns of Arvin and Lamont.

Speakers explained AB 60, the new law which will allow California residents, regardless of immigration status, to get driver licenses. The DMV had representatives on hand to answer specific questions.

Those in attendance learned how to protect themselves from fraud, specifically scams related to recent executive actions on immigration. In addition, people were given an opportunity to have free on-site consultations with immigration counselors and attorneys. 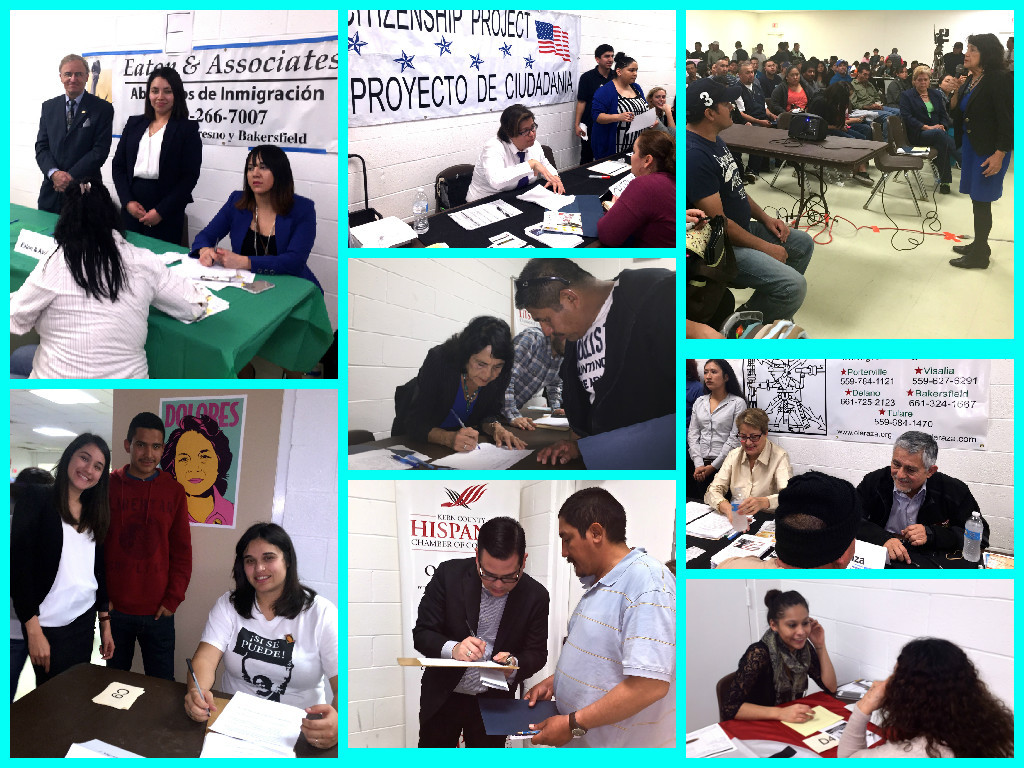