Call to Action: Join Forces with DHF and Dignity in Schools Campaign California to End Student Push Out 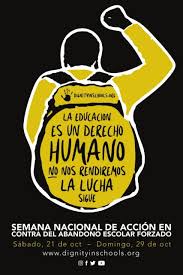 Join KEJC and Dignity in Schools Campaign California October 21st to 29th to call on schools and districts across the nation to end the pushout of students of color. This week’s theme is: “Education is a human right! We will not give up the fight!”

Although suspensions and expulsions have gradually gone down for all groups since 2009-10, there is more work to do. Racial inequities persist. At KHSD in 2016-17 the suspension rate among African-Americans was 22.4% as compared with 8.5% for Whites. African-American youth represented 23% of all expulsions even though they only made up 5.9% of enrollment. When students are suspended and expelled it increases the likelihood that they will drop out, enter the juvenile justice system, and become imprisoned as adults.

Education is a human right. When we push youth out of school, this takes away their rights and it is detrimental to our community’s well-being. Preparing our youth for college and careers benefits us all. They become adults that are productive members of society with  jobs, which is increases our tax base, decreases crime rates, and leads to greater overall economic growth.

When the community comes together and demands change it works. When parents and community organizations came together to demand that KHSD stop pushing out  Black and Latino students, eventually pursuing justice through the legal system, KHSD was forced to reform their discipline practices. The result is a historic civil rights victory for African American to and Latino youth achieved through the lawsuit settlement. In another victory for school climate, a bill was passed in Sacramento which prohibits a school from permitting  teachers and parents to carry concealed weapons on campus. Sacramento responded to the community’s actions in opposition to KHSD’s attempt to allow staff to carry concealed weapons at schools.

To bring about further change at KHSD and to dismantle the school-to-prison pipeline once and for all, now more than ever the community needs to stay engaged. Here are some of the following ways you can get involved to make a difference: