Join the Kern Education Justice Collaborative, the Dolores Huerta Foundation, and Faith in the Valley Kern in calling on KHSD Board of Trustees to overturn policies allowing select CCW permit-holding teachers and non-staff to carry firearms on high school campuses.

As community members who care deeply about the safety of our youth, we are calling on KHSD Board of Trustees to rescind policies allowing select CCW permit-holding teachers and non-staff to carry firearms on high school campuses.

KHSD Trustees first voted to allow non-staff CCW permit holders, including parents, to carry guns on campus on June 27th. Then on November 17, 2016 they called together a special meeting under outrageous circumstances, where they approved a proposal allowing teachers and other school personnel to carry arms on campus. The public was given a mere 24-hour notice and the meeting was held at an hour which made it difficult for parents, teachers, and other community members to attend.

Over the past few months, the public—including teachers, school administrators, parents, elected officials and retired law enforcement officers—have come out strongly in overwhelming opposition to these dangerous policies which threaten to harm children and add more lawsuits to the many the district is already facing.

Permitting more guns on high school campuses is dangerous. Having ready access to guns actually increases the risk of homicide. This puts over 37,000 students at risk. Gun violence disproportionately effects students of color. The KHSD is a racially diverse school district with some campuses having ethnic minority populations of 89% or more. Additionally, this policy will increase liability costs. Increased liability will likely take general funds away from classroom instruction. 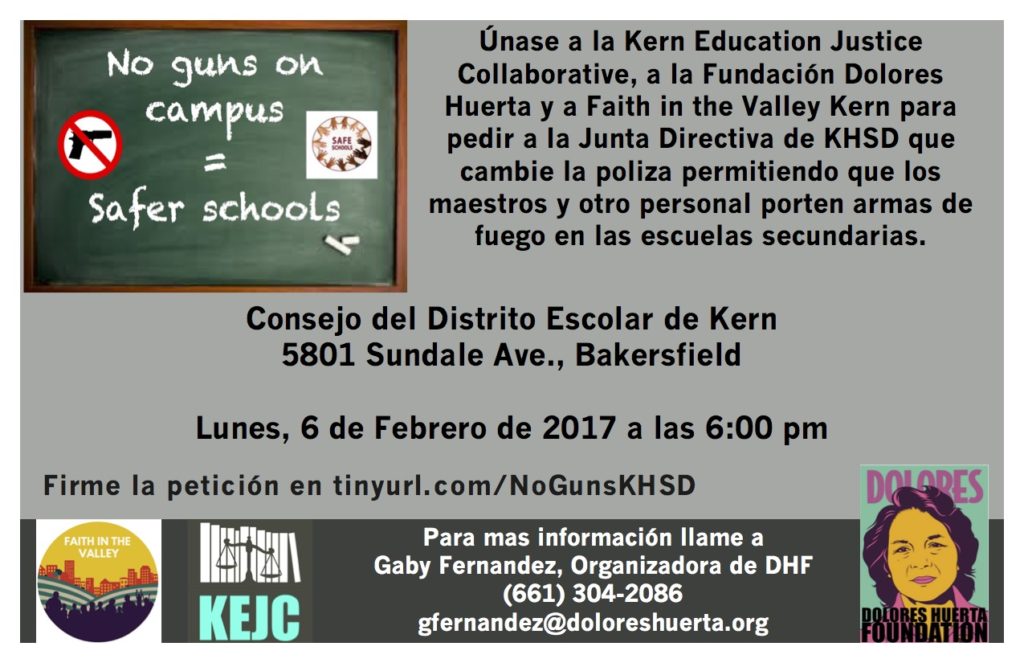