“As community members who care deeply about the safety of our youth, we are calling on Kern High School District Board of Trustees to rescind policies allowing select Carrying Concealed Weapon (CCW) permit-holding teachers and non-staff to carry firearms on high school campuses.” Please sign the petition. Click here to add your name: tinyurl.com/stopKHSDguns

KHSD Trustees first voted to allow non-staff CCW permit holders, including parents, to carry guns on campus on June 27th. Then on November 17, 2016 they called together a special meeting under outrageous circumstances, where they approved a proposal allowing teachers and other school personnel to carry arms on campus. The public was given a mere 24-hour notice and the meeting was held at an hour which made it difficult for parents, teachers, and other community members to attend.

Over the past few months, the public—including teachers, school administrators, parents, elected officials and retired law enforcement officers—have come out strongly in overwhelming opposition to these dangerous policies which threaten to harm children and add more lawsuits to the many the district is already facing. Some of the most vocal proponents in favor of these policies are firearms trainers at local gun stores. In an apparent conflict of interest, some of the non-staff CCW holders who were granted permission to carry guns on campus are members of a church in which former Trustee Chad Vegas is their pastor. They meet on KHSD grounds during the weekend. These policies have the potential to endanger children who rely on public schools, and they were passed by Vegas even though he has removed his own children from the public school system and has gone on record encouraging his parishioners to do the same. In December 2016, Joey O’Connell, the new Trustee replacing Chad Vegas, will be sworn in. During his campaign, he told members of the local chapter of the California Teacher’s Association that having more guns at schools creates more problems. A new board of Trustees creates an opportunity to raise our voices and demand that they rescind these misguided firearms policies. Permitting more guns on high school campuses is dangerous. Having ready access to guns actually increases the risk of homicide. This puts over 37,000 students at risk. Gun violence disproportionately effects students of color. The KHSD is a racially diverse school district with some campuses having ethnic minority populations of 89% or more. Additionally, this policy will increase liability costs. Increased liability will likely take general funds away from classroom instruction.

Watch the interview with DHF Civic Engagement Director, Gerald Cantu, Ph.D. by clicking on the image below. 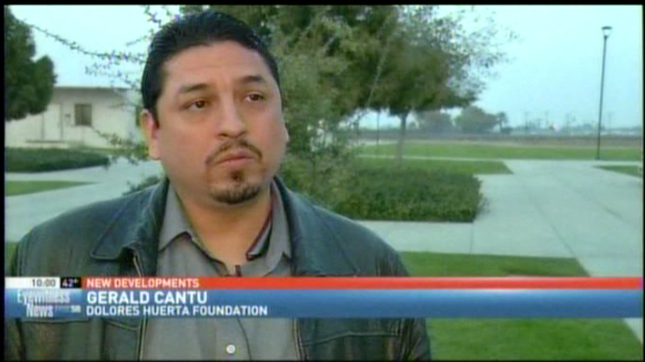