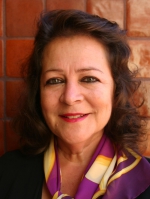 Barbara Carrasco is an artist and muralist.  Her works have been exhibited throughout the U.S., Europe, and Latin America and her work has been featured in numerous publications: Ms. Magazine (2008), Los Angeles Times, New York Times; USA Today; Artforum; Boston Globe; new England Journal; High performance, and Flash Art.

She received her M.F.A. in art from California Institute of the Arts (1991) and her B.F.A. in Art from UCLA (1978).  Carrasco created numerous mural banners for the United Farm Workers Union (1976-1991).  She was invited to the former USSR to paint murals in Leningrad and Armenia (1985 and 1987).  Carrasco created computer animation PESTICIDES! That was presented on the Spectacolor Light-board at Times Square in New York (1989).

Her original mural sketches and drawings are included in the Permanent Collection of Works on paper at the Library of Congress, Washington D.C. (1989).  Documentation of her mural work is archived in the California Murals Collection at the Smithsonian Institution (1983).  A permanent collection of her papers has been established and archived at Stanford University Special Collections Mexican American Manuscript Collections (1996).  Her oral history is archived at the Archives of American Art, Smithsonian Institution (1999)

Carrasco had her Mid Career Survey Exhibition, A Brush With Life, in 2008 at the Vincent Price Gallery at East Los Angeles College.  Carrasco was appointed the 2002-2003 UC Regents professor for the Spring Quarter at UC Riverside.  She has also taught at UC Santa Barbara and Loyola Marymount University.  In 2008, The Girl Scouts of America created a merit patch based on Carrasco’s image of Dolores Huerta.